This week Gillian Shaw featured us in an article in the Vancouver Sun about unpaid overtime.

At Steamclock Software, co-founder Allen Pike made a decision to not have employees work 70/80 hour work weeks. Employees are not expected to answer emails after working hours or be on call during holidays, weekdays and other off times.

The article was very kind, and we were glad to share our story. Honestly though, it’s ridiculous that this is newsworthy: a software company that works 40-hour weeks! 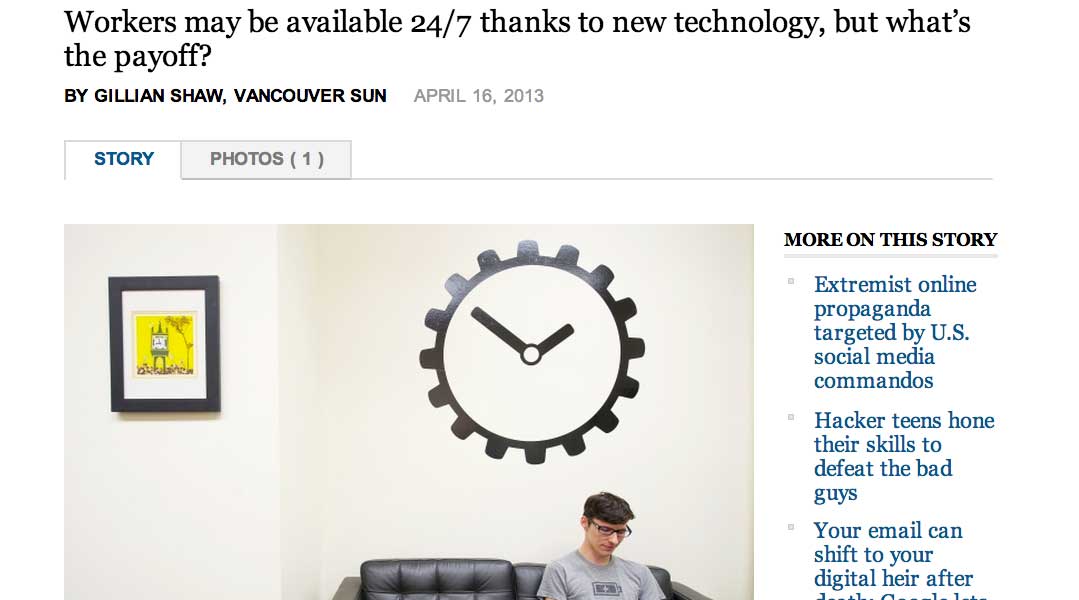 I suppose the Steamclock logo decal was worth it.

Working crazy hours is like living off your credit card. Let’s say you work 70 hours this week to get something out the door. Maybe that was necessary because you made some big mistake, or there was a last-minute opportunity that came along.

Now, you’re in debt 20-30 hours of productivity, with interest. In the best case that means you take some of next week off to recover. More likely, you spend some of next week in a daze, checking Twitter more often than usual. You’re tired, demotivated, or generally less productive, driving you to miss estimates. What’s the solution to missed estimates? Another 70 hour week!

Now your team is zombified, overworking themselves just to get a normal amount done in the face of being tired and demotivated. What’s going to happen? They’re going to leave. Hopefully to come work for Steamclock - or maybe somewhere else that has a sane working culture.

As a small business, you’re limited in what you can do to attract and retain awesome people. Offering more freedom, less bureaucracy, and a better culture is easy. Competing with Google dollar for dollar is hard.

So instead, try working damn hard for 40 hours, then going home and recharging. That’s what we do, and it works better than you’d think.

Leveling up your team